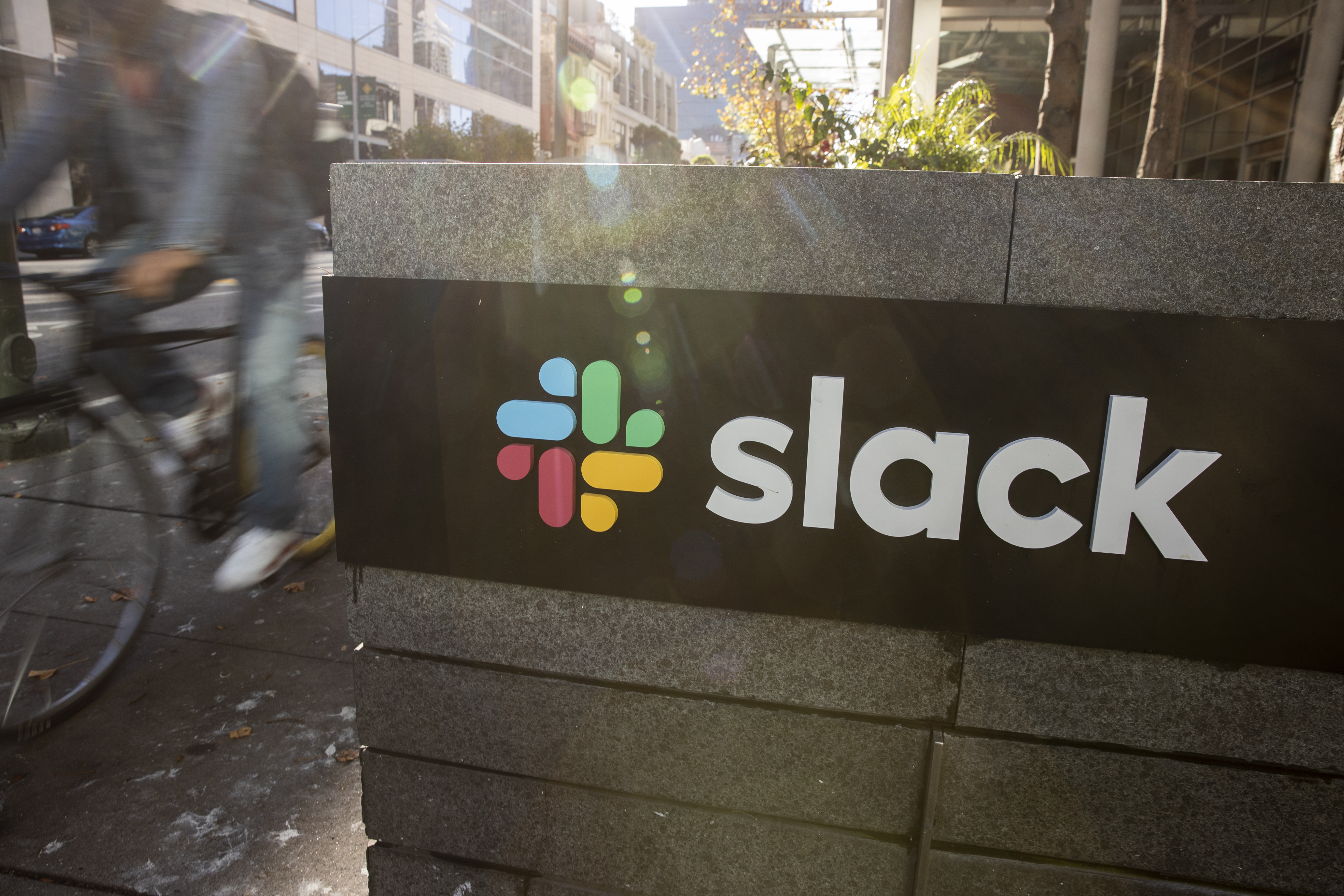 Salesforce is paying $28 billion to purchase Slack,  the intraoffice texting service that
has turned the American workplace into a dystopian micro-Twitterverse. Sold as
a tool to improve communication and promote teamwork, Slack has in fact made
office life miserable, especially during the Covid-19 lockdown.

Created in Febuary of 2014, Slack was a darling of the business world
from Day One. Without a single salesperson on staff, it had 1.7 million users within two years and was pulling in $45
million in annual revenue. The product’s appeal is often attributed to its
founder Stewart Butterfield’s experience developing and packaging consumer
products like the photo-sharing service Flickr.

From the start, though, “Slack” was a misnomer: it was intended
to eliminate, rather than encourage, time-wasting at the office. Members of a
given work team could communicate instantaneously, eliminating the bother of
scheduling a face-to-face meeting or walking over to a co-worker’s desk. The
ideal was to eliminate all the little misunderstandings that create workplace
friction and get everybody rowing in the same direction.

I was working as a middle manager in a large news organization
when Slack took corporate America by storm, and naturally, my company just had to
have it. My feeling was that it was a solution in search of a problem. We
already worked in pretty small teams, and I’d never experienced much trouble
keeping abreast of what my charges were up to, or what my boss wanted. The
middle managers in my department all sat together, and if one middle manager
needed something from another middle manager, he or she could bellow the
request or walk a few paces to the desk of the would-be collaborator in
question. Email groups were arranged according to topic and department. And if
that arrangement was too slow, you could call a coworker’s cell phone (we had a
company directory) or send a text. If all else failed, you could schedule a
meeting.

For a while, the use of office Slack channels at my shop was
voluntary. I volunteered not to use them because I couldn’t bear loading yet
another communications platform onto my laptop. But as more and more of the
action shifted to Slack, I had to relent, especially after Covid-19 made
face-to-face communication possible only through Zoom.

You hear a lot of grumbling about Zoom but I have no problem with
it. Unlike Slack, it doesn’t cry for my attention like squalling newborn babe.
Meetings are scheduled in advance; if you don’t want to go, you don’t
necessarily have to. Granted, it’s far from perfect. Because two people can’t
speak on the platform at once, it’s easier for some pain-in-the-ass coworker to
filibuster. But Zoom hasn’t done any particular damage to office life that I
can see.

Slack, on the other hand, has screwed up working life in a
variety of ways.

It saps productivity. Intraoffice communication platforms like Slack were supposed to
limit the time office workers spent yakking at one another by making the
yakking maximally efficient. A 2012 McKinsey study said the adoption of these brave new
task-management apps would increase productivity by 20 to 25 percent.

Fat chance. If you widen a road to reduce traffic congestion,
what generally happens instead is that you get the same level of congestion,
only with more vehicles. Similarly, if an office opts for Slack because
everybody’s email in-box is overflowing with crap, it’s magical thinking to
believe that their Slack channels won’t soon be overflowing with crap, too.
Note the plural. Slack channels multiply like rabbits in heat. A 2019 Recode piece reported that employees at large
companies sent more than 200 Slack messages per week. Some of these companies
had more Slack channels than they had employees.

It crushes individual initiative. The typical boss has a weakness for believing
that everything would be fine if my office workers could only be made to
do exactly what I want, every second of every hour of every day.
Slack puts that proposition to the test by maximizing the reach of that
wrongheaded ideal. The inconvenient truth is that, unless you’ve hired a pack
of imbeciles, the success of your company depends on workers showing initiative—which
in turn depends on their getting away from the boss long enough to develop
relationships with outsiders (sometimes known as “customers”), gathering a bit
of information, and thinking matters through. Slack discourages such behavior
by immersing hapless workers in conditions of managerial surveillance around
the clock .

It encourages snap judgments and bullying. I’m no great fan of meetings, but gathering a
group of people face to face to exchange ideas usually forces them hear one
another out in courteous fashion. Slack is like a meeting that never ends, but
because it’s done facelessly there’s much less pressure to be properly
attentive and courteous. The social lubrication that comes from looking at
another person’s face and hearing that person’s voice—even on Zoom—matters
quite a lot, and it’s absent on Slack. Moreover, in pandemic times we don’t have
to worry about bumping into whoever we just gave the back of the hand to at the
water cooler. In this way, Slack makes office communication dumber and nastier.

Much has been written about the role that Slack recently played
in workers getting managers fired for offenses large, small, and, in some
cases, nonexistent, through collective action that intimidated the big boss
into cutting the offender loose. I don’t want to re-litigate these
controversies, but at least some of them might have gone better if they’d
played out in person. Like Twitter, Slack encourages a certain detached
contempt for the person being criticized.

Don’t kid yourself that this contempt travels only in one
direction, up the chain of command. It’s far likelier, especially during
economically difficult times, to travel down. I have witnessed, and on one
occasion experienced personally, managers expressing a level of nastiness on
Slack that I don’t think they would have thought advisable in a face-to-face
encounter. Because of its misleadingly impersonal interface, Slack is too
conducive to cutting off discussion and barking orders like some Parris Island
drill sergeant.

Since we live in a golden age of communications, we’re
susceptible to believing that more communication is always going to be better.
But Slack has Americans communicating with one another too much, and on terms
that don’t encourage listening. We chat too much, converse too little, and
could all use more time to be left alone to do our jobs. It’s an odd complaint
to raise during a pandemic lockdown, but we could all use a bit more room  to cultivate our gardens. The endless
yak-yak-yak of Slack deprives us of that necessary solitude.

Source: Down With Slack